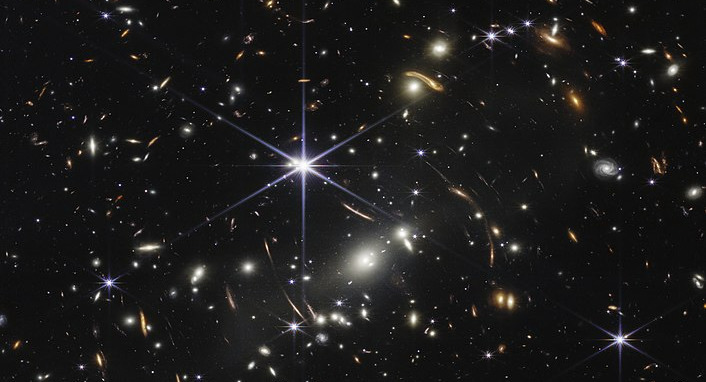 The space year 2022 marks a milestone in space history. Just before Christmas, it’s time to take a look back.

Almost exactly one year ago, we experienced a very special launch in Kourou: after nearly 30 years of development, the James Webb telescope flew into the sky on an Ariane 5. Six months later, the first images fascinated the whole world.

Then, a few weeks ago, we witnessed the successful first test mission of the Artemis program. Not only did a spacecraft get close to the moon for the first time since 1972 — no, with the Orion, a spacecraft designed for humans came further away from Earth than ever before. With the European Service Module (ESM), ESA supplied a centerpiece of the mission.

The year 2022 marks a milestone in space history.

We are on the brink of a new age of discovery. Thereby, we can rely on innovative and powerful agencies. NASA and ESA, in their successful partnership, show us what space exploration is really all about: getting to the bottom of the secrets of our universe.

I am happy that European governments are increasingly taking account the tremendous importance of space exploration. At the last Ministerial Council, a significant increase in the ESA budget was achieved. A three-year budget of 16.9 billion euros was agreed. That’s a lot of money — but it’s still less than the needed 18.5 billion and far below what the U.S. government invests in NASA.

I will continue to campaign for an increase in spending. A strong ESA is indispensable — especially in times of growing international tensions. European values need a strong voice in space.

The growing importance of space is also reflected in the fact that the European Union is launching its own new satellite constellation IRIS². The final decision will have to wait until next year. But we have reached an agreement that focuses not only on secure communications, but also on providing an Internet service that can be used in remote regions and as a back-up to terrestrial connections. Furthermore, IRIS² is intended to boost the European space industry. Small companies and start-ups are particularly involved in the production chain.

Unfortunately, the past year has also shown that space is increasingly becoming a theater of conflict. The war in Ukraine is also a satellite war. As expected, we have registered thousands of new pieces of debris this year due to the Russian ASAT test in November 2021.

Finally, 2022 will also go down in history as the year when more than 2000 satellites were launched into orbit for the first time. The risk of collisions and conflicts in orbit is growing. It is therefore fundamentally important that a critical discourse on human activities in space grows beyond expert circles.

I am particularly proud that my proposal to establish binding sustainability criteria for the new EU satellite constellation IRIS² was adopted. My hope is that this model can serve as a basis for international standards in the future.

International rules that ensure that everyone participates in and benefits from spaceflight and that we can continue to operate in it for a long time to come are my goal. The first step towards this is the EU Space Law — for which we laid the foundations this year.

I wish you a Merry Christmas and a Happy New Year, and for 2023, peaceful, sustainable space exploration — and hopefully a successful launch of Ariane 6!

In June, I visited Sierra Space. The company, based in Denver, Colorado, is best known for its Dreamchaser. A space glider that looks a little like a small shuttle and is supposed to take people into space soon. However, the focus of my visit was on a different topic. The company – a spin-off of…

The debate on the planned European megaconstellation (“Secure Connectivity“) is gaining momentum. In June, the responsible rapporteur of the European Parliament, Christophe Grudler (Renew), presented his position in the Industry Committee. As shadow rapporteur for The Greens/EFA, I was now able to submit my amendments. I am mainly concerned with three points.  First, I want…